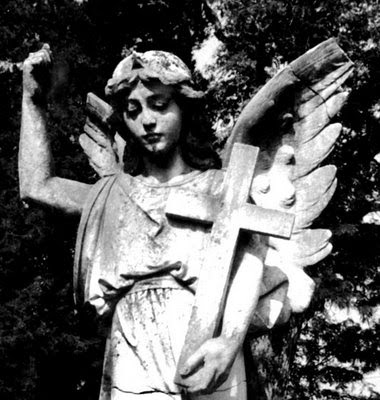 I was always told that the Angels of Heaven hear us---and transport our messages to God. That is what I was always told. I was told that the Angels Of the Lord listen to our prayers and then carry those pitiful messages to God in order to petition God for whatever it is that we have prayed. Do you think it's really true? It's what I was always told in Catholic school---and believe me, I went to plenty of Catholic schools during my time in school-dom. (Even a Catholic nursing school, if you'll notice, if you read my series of haphazard posts called "Who Ya Gonna Call?" ) But....the thing is.... I'm not a Catholic. I have nothing against Catholics---but I'm a Southern Baptist. Or, if you will, a Baptist. And Baptists believe that you pray spot-on directly to God. You pray to the Almighty One Himself. You bypass Catholic saints, you bypass angels, and you bypass any other sort of junction. The Baptists believe that, when you pray, you're talking to (if you're "southern") (excuse the southern slang) to the Big Dog Himself. Do you think that's it's really true?--- that God is hearing you when you pray?....and when you mourn?.....and when you are in great distress?... or when you feel grief so great that you can't imagine surviving the morrow? Because what I'm praying for today is a petition for my mother, her brother, and her sister. The children of Mamo..... because...... Mamo took her last breath at 3:15 pm today, with only her son and my mother there to comfort her. Their mother, my grandmother, my Mamo, died and left this earth.... And I pray wholeheartedly, on my knees, for God to have mercy on Mamo's soul---and also for the peace of mind for her children--- and.. also... this I know for sure..... If it was MY mother who died...... God help me, I would die, inside, myself. A beloved grandmother dying is sad and tragic enough----but I am obsessed with the thoughts of the point of view of my wonderful, beautiful mother. Her mother died!!! And I can't help thinking how hideously devastating it is for her---in fact, in my opinion, "hideously devastating" isn't a descriptive enough phrase for the feeling I would believe would be engendered by one's mother dying. I am so full of sympathy and empathy for my mother that I don't know what to do. The only thing I know is to write you guys. In fact, here are the things I told Blaine that I would do if my own mother died: I would die. I would die. I would be inconsolable forever. FOREVER. I would go to the nearest fucking bar and drink my stupid self into a stupor. (Which drinking alcohol is not something I am permitted to do since I am a recovering alcoholic....) I would die. I would die. * Mamo has died. Yes, I am going to Texas again. * * Mamo......... * *
Posted by Bo... at 4:44 PM

Bo, if I could reach through this computer and give you a big hug, I would. And yes, I think angels truly hear. So do we bloggers.

My thoughts and prayers are with you and your family.
Terri

No, you wouldnt die. You would hurt so much you would wish you did. But you Mamo and your mother did not raise you to do other than pull your big girl panties up and get on with it....I am so sorry that your Mamo is gone. I am glad your mother was there with her. Hugs hugs hugs.

I'm sorry to hear about your grandmother's death. I lost my own grandmother this past March and it is still raw.

I am so sorry for your hurt. Steph in NH

Bo, your Mamo survived when her mom died. You come from strong stock. I remember my mom telling me that she wasn't ready for her mom to die (when we were on the way to see her in the hospital). It is hard, but we did get through it. One is never ready for the finality. Now I'm a grown up, like you, with a mom, like you. And I also think I couldn't face having her gone. And yet we do know there will be that day. And I will cry. And smile at the good memories.
It is good that you are going to your mom. She's going to need some TLC----you are right on that! Cry, love each other, share memories.
Come on back, we will keep reading/listening.
And I'm of the persuasion that one can talk directly to the Big Dog, and He delights in it.
hugs!

Nothing, I believe, is ever lost. One thing we know for sure is that we all die one day....and only your physical body is gone. Nothing else is lost. Your grandmother's thoughts, dreams, love for her family, actions, and energy is not lost. You feel her now....I do ache for your mom, for suddenly realizing one's role as a daughter is done, is hard. But nothing is gone/lost/forgotten. Peace.

What a wonderful blessing to know such love! Your mamo is going home with much celebration and joy, free from pain, and secure in the loving testiments of those she loved in her living.

The loss is achingly harsh, but you keep breathing because your mamo loved you LOTS.

Aw Bo - condolences...no easy answers here except Mamo doesn't hurt any more and I believe she is in a glorious place and you will be reunited with her again sometime in the future.

Hugs, Bo. My own mother died in February 1986 (at age 66), and I miss her still today. I often ask myself, what would Mom do? and it comforts me. She is gone, but not far from my thoughts always. After her period of intense grief, I am sure your mother will feel similarly. And she has you to help her through. Again, hugs.

I am sorry for your loss.

A couple of weeks ago, a gent I went to school with's mom died. She was 65 and riddled with bone cancer. being a friend from forever ago, I went to the funeral. The one thing I couldn't deal with was the fact that she was indeed his mom. It made me reflect on my own life. I am a mom! I have only one child and her dad is a jerk and has bugged out of her life. If something were to happen to me I have no idea how she would handle it cause if something happened to my mom, I would be crushed forever. So I told my gal after I picked her up that if something were to happen to me she was to invite the silliest people she knows that have no shame and don't know how to act at a funeral. Cause I want her laughing and smiling and know that life will go on. That I won't be far from her ever. She said that she would cry forever. I told her you better not or I'll haunt you. ;-)
Big hugs to you Bo!! I know how painful it is!! You and your family are in my prayers!!

I believe that God, Himself, hears and answers our prayers. Your Mamo has been healed ... for eternity ... no more pain again ever. God will give your mother and her family, including you, the strength and comfort you need. I read a poem or reading some time ago and now I can only remember the last line of it but it likened your life to a ship and ended with your casting off here and on the other shore, everyone was saying, "Here she comes" with great joy. That image gives me great comfort and I trust it does the same for you.

Mamo's not gone, all that she gave, all that she said and did, all the work she put into her family lives on, in you, in your mother, your uncle and all the other lives she touched. She continues on in each and every one she became a part of. Her body was worn out, not replaceable, it was time, yes, past time for her for her spirit to be free from that human body...
I know you and your mother, the rest of the family will miss the physical presence of Mamo--but, Bo, look inside and all the best of this wonderful grandmother is what is the best of you and of your mother..and yes, God does hear our prayers, our cries and always listens, even when we are yelling in pain and hurt and anger...
And so do your friends here,

My mother died a year ago. I didn't think I could survive. But I did. Mamo survived when her mother died, and her mother before her.

God hears your pain now and he hears your prayers every single day, and he will be ever near you when the time comes.

You will survive. You don't think you could. But you will.

I'm terribly sorry for your loss.

Big hugs to you and please take care.