OK, I Think The Story Would Be More Believable If Little Red Riding Hood Was Attacked Not By A Wolf But By A Bull--Like Matadors... 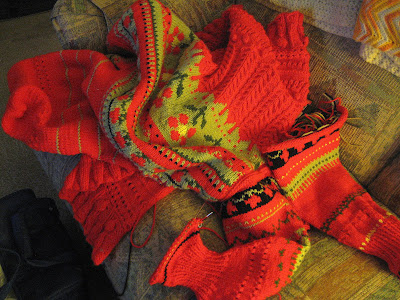 And ssshhh again.... Because the below is what that idgit Little Baby does between tuna feedings..... 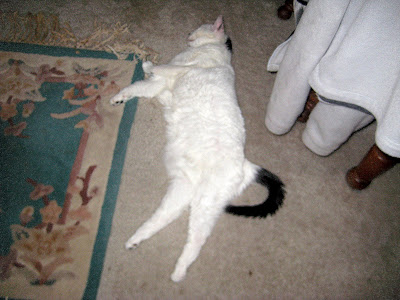 * So there I was, making some red psychedelic beads, and I heard distant thunder---which was odd, since it had just been sunny and hotter than hell just a few moments ago. 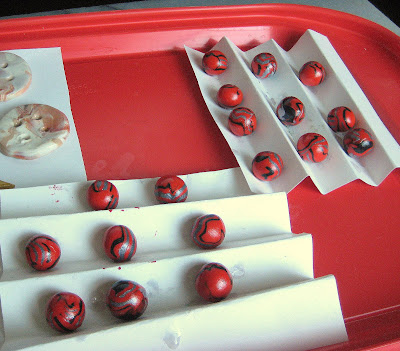 But anybody who knows me will tell you that I love storms. So, knowing the thunder was announcing the imminent arrival of a storm, I ran downstairs, grabbed my camera, and went out on the back deck to watch the storm come in and, hopefully, get some good pictures of it. 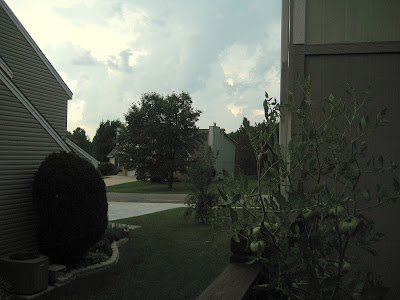 All of a sudden I heard Blaine yelling: "Hey Dumb Dora! It says on the TV that there's a bad storm coming in from the west and that lightning could even be miles up front of it----and so you had better come inside."
I replied: "You don't have to tell me where the storm is---that damn new TV is so big that I can see the weather lady from here!"
And then...amazingly.....I heard another sound.....a sound which has eluded me for 18 years.
I heard the lovely jingle of the bells on a Good Humor Ice Cream Truck.... But.... no matter which state I've ever lived in, I have always tried to catch the ice cream man without success. I have been thwarted in my efforts to catch one time after time again, year after year, as for some reason the damn ice cream men I've encountered all think they're Dale Earnhardt in the Indy 500, speeding through the neighborhood at jet engine speed.
But I'm stubborn..... and so I rushed into the house, grabbed some of Blaine's quarters on the dining room table, and flew out the front door towards that wondrous jingling sound which announces that the ice cream man cometh..... 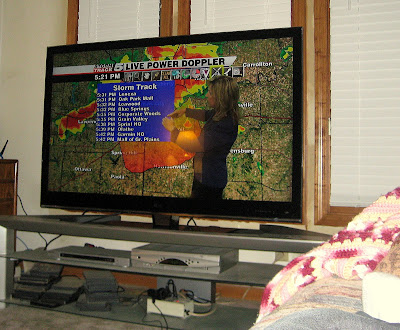 Sprinting like I was in the 100-yard dash, quarters clutched in my left fist, I ran like hell towards the ice cream man. I saw that he was still on the cul-de-sac----which meant that he'd HAVE to pass where I was in order to leave the street. And I was taking no chances....
And then the storm arrived in earnest. Large sheets of rain began pelting the neighborhood and thunder and lightning were all around.
But I wasn't going to let this ice cream man go. I wanted a damn Good Humor "Sundae Cone". And I knew that the ice cream man was going to try and speed away, since he knew nobody would come out to buy an ice cream in hurricane-force winds.
But I was way ahead of him!
I ran out into the middle of the street, waving my arms like a madwoman, signaling the ice cream man to stop. And he had to stop in order to avoid running me over.
"I want a Good Humor Sundae Cone!" I yelled at him, my voice practically drowned out by the thunder and winds.
Aghast, and giving me a look which I know meant he was questioning my sanity, he quickly grabbed one of the precious cones out of the freezer box and said: "That's two bucks."
I counted the change in my hand, and announced: "Oh DAMN! I'm short---let me go inside and get some more money....."
But he yelled back: "Are you nuts? We are in a major storm here! Just give me what you've got!"
So I forked over the money and took possession of my Good Humor Sundae Cone---and hurried back into the house, my entire body soaking wet.
See? I did it! Hee hee!! I overcame an 18-year curse and finally caught the damn ice cream man! HEH! 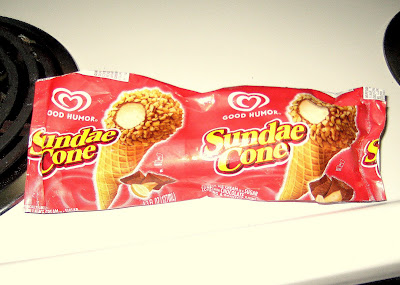 I started cavorting around the living room, waving my Good Humor Sundae Cone under everybody's noses, bragging to Blaine, Leonard, and Little Baby about my success in getting something I'd wanted for 18 years--- but nobody was interested. Blaine just sighed and rolled his eyes at my stupidity in going out into an electrical storm, and the cats weren't even listening.
I noticed Little Baby sleeping on the sack into which Blaine had put some dried herbs he'd picked off the deck garden. Obviously, Blaine hadn't noticed it yet. I chuckled to myself to think how he'd blow his stack when he saw that. 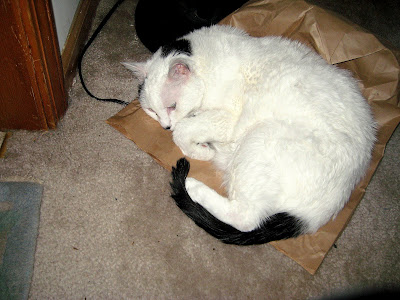 Really, I Have Better Things To Do Than Worry About A Pouting Cat...

* * Okay, so idgity Blaine has a 55" television set delivered. 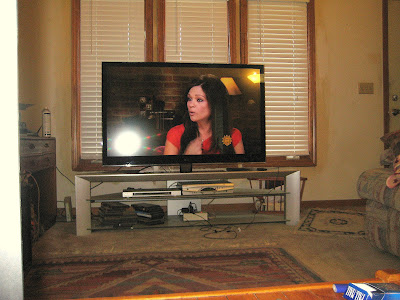 And I'm left wondering what in the hell was wrong with our old behemoth below? It was huge, too... I couldn't resist remarking: "Why don't you get it over with and install an IMAX system in here? We could invite the neighbors and charge money for watching it--- with popcorn and everything." He did not respond. 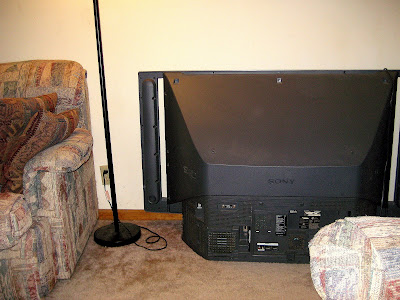 And look below, at Little Baby's face and tell me what she's saying. Well I know EXACTLY what that face means. It means: "I don't give a damn about the new TV, I just want tuna placed into my bowl---NOW!" 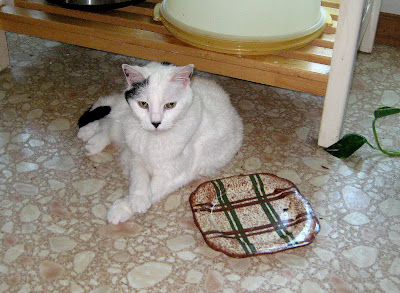 * I think I've found the perfect omelete recipe. I made it up myself. And if anybody would like this recipe, here it is: First, gather your ingredients. I use salsa as a garnish, so I get that out first thing. (I like the kind of salsa with cilantro in it.) 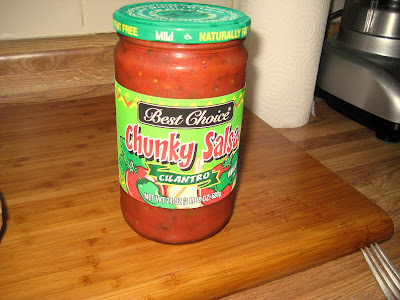 Next, I chop up some onions. I also chop up a handful of some of my homegrown cherry tomatoes, which I'm growing on my deck. 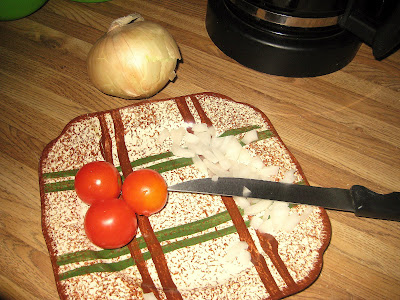 Grab some of your favorite cheese. I use half a slice of cheddar. And also grab your silicone rubber utensils. (I think they're silicone---it's that type of rubber which won't melt if you use it in hot pans.) My silicone rubber spatulas were given to me by my sister at Christmas, since she also gave me non-stick Calphalon omelete pan. (The secret of this omelete is having a really good non-stick pan.) 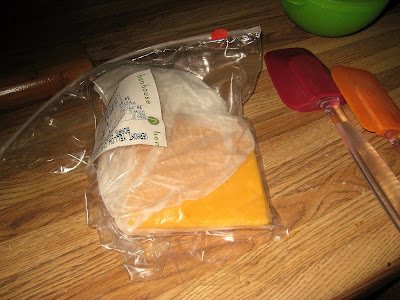 We'll need just a bit of half & half. 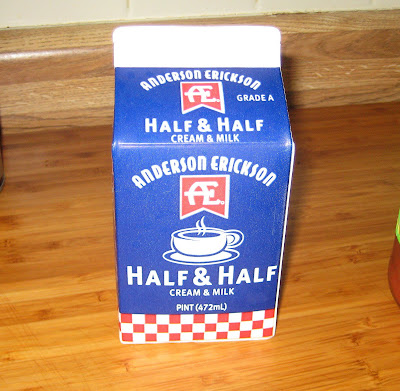 And we need spices. First off, I use Dill. I have to use store bought dill since I didn't grow any in my kitchen herb garden. 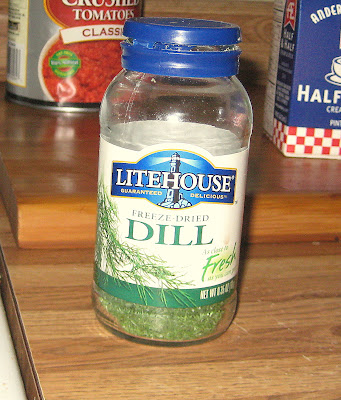 And you'll need some good ole salt & pepper. (My sister gave me that pepper mill at Christmas, too, can you believe it? She also gave me a wonderful crock pot and Rubbermaid blender.) 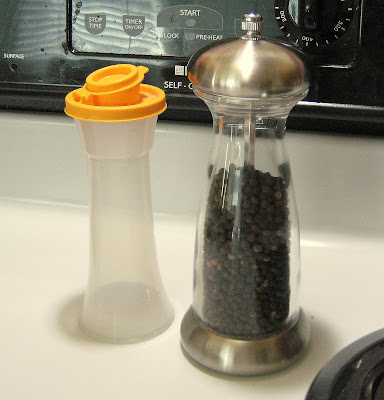 And then I go to the deck garden and pick some basil. I finely chop about a tsp and a half. (Basil is a strong herb so you have to err on the side of "not enough".) 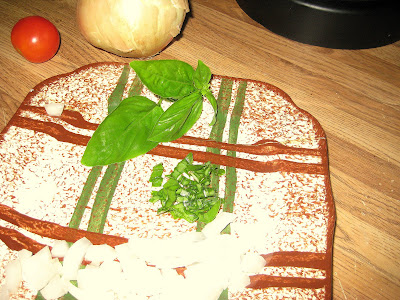 Then crack 2 eggs and one extra egg sans the yolk into a container and whip. Put in about a tbsp of the half-and-half. You can put your dill in there, too. And you can put the salt & pepper in there, too. 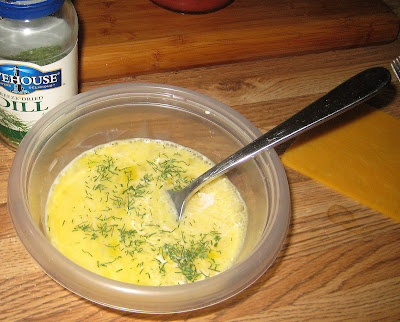 After melting one tbsp of butter in the Calphalon non-stick skillet, pour your egg mixture in. I put the temp of the burner on "6". And I'll cook the mixture for 4 minutes. 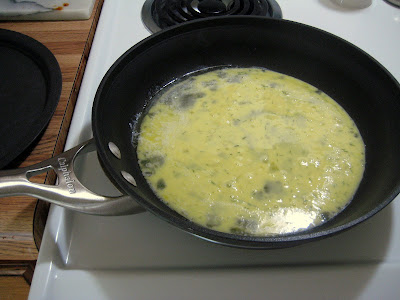 While those 4 minutes are ticking away, keep a lid on the pan. 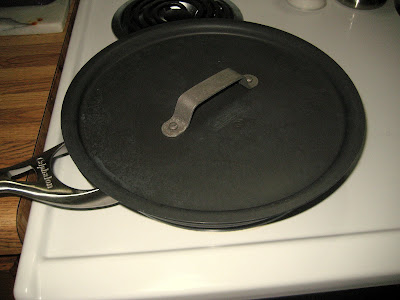 At the end of the four minutes, when the bottom of the omelette looks as if it's getting more solid, lower the burner temp to "4", and then gently lay the tomatoes, onions, cheese and basil in there---on an area of one half of the omelete. 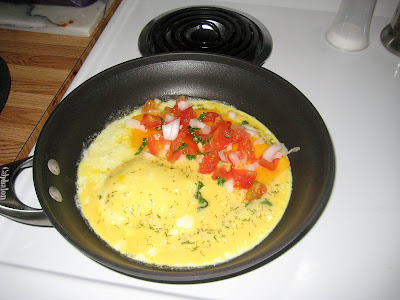 Let it cook a little more (maybe 2 more minutes). Use a rubber spatula to gently loosen the edges of the omelete all the way around---and that way you can gently loosen any parts in the center which seem "stuck". 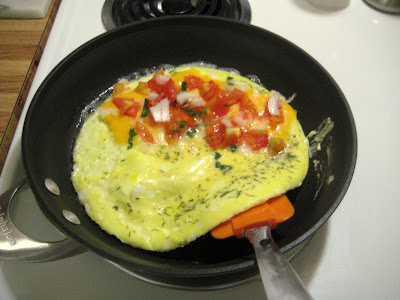 When you know the omelette is not stuck anywhere, and the vegetables are cooked, and the omelete, too, looks almost completely cooked----gently use one (or two ) rubber spatulas to "flip" the omelete. (This is the fun part.) 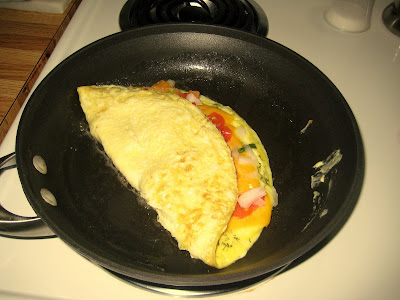 Let it cook a minute more, and then gently slide your omelette to your plate. You can use the rubber spatula to help this process. 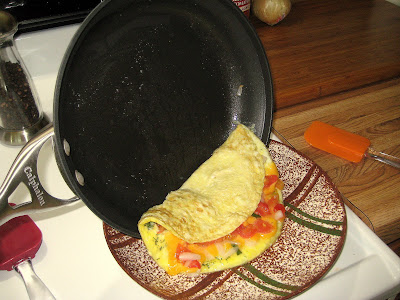 Garnish with the salsa and a sprig of basil....and VIOLA! Bo's fresh basil and homegrown tomato omelette! 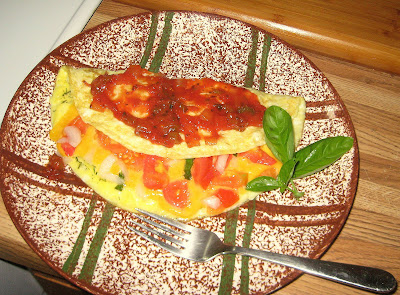 Now That Wasn't So Hard, Was It Yarn Harlot?

*
*
I've played all my cards, And that's what you've done too, Nothing more to say, No more ace to play, The winner takes it all.....
("Winner Takes It All", ABBA) *
Just wanted to let everybody know that I'm finally happy---deleriously happy. It took me one full year of enduring hatemail from Yarn Harlot fans.... and one full year of me trying to explain my stance on the matter... and one full year of people threatening all kinds of violence against me (like bad wicca spells, boycotting my blog, and calling me every hateful name in the book)---but I finally achieved my goal. And that goal was simple (and here it is): I wanted Yarn Harlot to prove that she could write a Canada Day post without denigrating America in her commentary. And guess what? She did so this year!!!! Yay, Yarn Harlot!! She stuck to the point and wrote about the good things of her country---the Canadian things to be proud of in and of themselves. And, thankfully, she didn't write good things about her country at the expense of Canada's southern neighbor--- us--- the USA. She wrote her post with simple Canadian patriotism, sans comparing it in a more favorable light than the USA, which is admirable, considering how she usually writes her Canada Day posts. In other words, she didn't lean on criticism of the USA to prove her positive points about Canada. And that is all I wanted!!! So yes, I am happy. But truthfully? I didn't think she could do it. I really didn't. Yarn Harlot has a lot of angry passive aggressive bones in her body and she is extremely stubborn and prideful. I truly didn't think she could step out of her usual disdain for the USA and write a post simply about how much she loves her own country---especially since it was at the behest of somebody she hates with a passion---which is me. Anyhoo, I'm happy. Deleriously happy. So see, Yarn Harlot? That wasn't so hard, was it? Aren't you proud of yourself? And like Forest Gump said, "And that's all I have to say about that." (Yes, I'm letting the whole damn matter go after I do my own July 4th post.) * *
Posted by Bo... at 6:25 PM 15 comments: