I Guess PETA Has Pretty Much Left Louisiana Alone.... 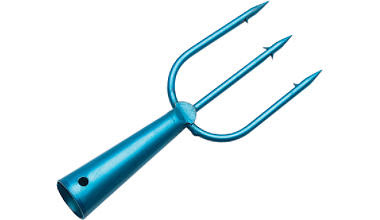 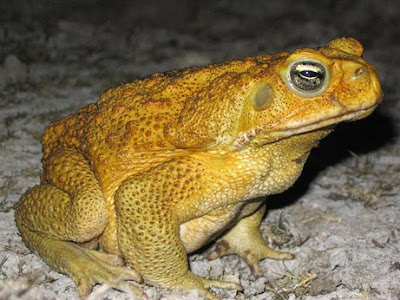 Okay, I'm going to explain the term, but I want to caution you---it's rather grizzly. It's a Cajun, Louisiana swamp activity. And even though I'm half Cajun by having a Southern mother from the swamp lands of Louisiana (which is the capital of gigging frogs), I personally have never gone frog gigging. I think it is too cruel. Nevertheless, frog gigging is a huge sport in the swamps of Louisiana. After a good "giggin'", I've seen frog giggers proudly hold up strings of frogs to brag about how many frogs they've gigged (and the size of the frogs), sort of like how proud fishermen hold up strings of their fish they've caught. Here's how it goes: You see that trident thingy above the song lyrics? It is a standard frog gigging tool, comprised of 3 spears, each with prongs. And this instrument is attached to a pole of about 6 feet to 12 feet. 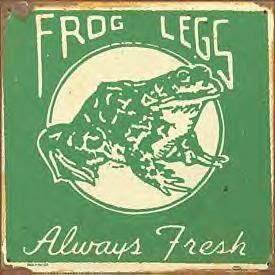 Then you take it out in the middle of the night when the hapless frogs are all sitting on shore or lily pads. The boats are usually so small that only 2-3 men can fit in it. And the boat glides gently and silently in the water through the swamp. 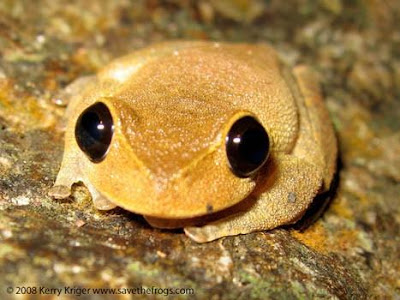 What the guys are looking for is toads and frogs---especially the big ones. Here's what I always wanted to know. Why do they calling it "gigging"? Everything else in the swamp is "hunted"---like alligator hunting. But I have to admit that it would sound kind of stupid to call it "frog hunting". Hunting implies some personal danger---but there's no danger to one who is looking for frogs, ergo the less sinister sounding "gigging frogs" versus "hunting frogs".... Anyhoo, the next thing you need (besides a boat and a trident with 3 spears of prongs) is a well-fitting hat with a head lamp on it. That way, you can search for the frogs in the dark of night. 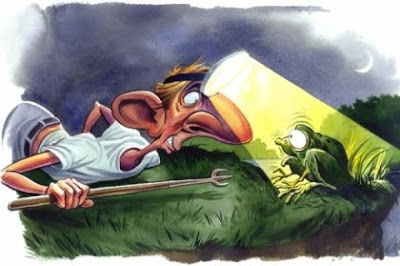 And, of course, I guess by now you've figured out what the frog giggers want---which is the frog legs. Frog legs is a favored delicacy in the swamp. They're easy to get, taste good, and there's a never-ending supply of them. Frog legs are usually rolled in a batter and then deep fried. But some people like them sauteed in butter. 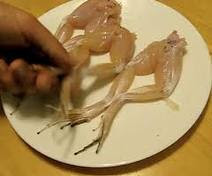 Anyway, this all brings me to the Southern expression of "his/her eyes bugged out like a giggled frog". It is because when a frog gigger thrusts his spear and penetrates a frog, the poor thing's eyes bug out. So there you have it. And don't worry---I think it's a cruel sport and so I've never gone frog gigging. (Plus I don't like the taste of frog legs.) However, although I think it's cruel to gig frogs, I do eat animals, like cow beef, chicken, fish, and crabs. Go figure. Anyway, it's a true sport in Louisiana, with skilled giggers competing in their frog gigging exploits, and I've seen frog giggers coming home with a gallon container of frogs. And I've even seen men taking their small sons on frog gigging trips in order to teach their kids the art of frog gigging from a young age. Poor little gigged frogs...... * *
Posted by Bo... at 6:37 AM

Frog legs....my mom served them once and when she finally admitted what they were, I just couldnt eat them cause I kept seeing those little frogs in my minds eye....then many years later we were at a PA Dutch Buffet and my son (who was about 5 - 7 at the time) kept going back for those 'really good little fried chicken things'. Hubby and I kept looking for little chicken things there...well, it wasnt until he was grown up that we told him what he really had been eating!!!

I'm the same way, Danielle. I can't eat frog legs because I keep seeing frog gigging in my mind! And I get nauseated when I think of eating frogs! I remember my mother's brother, my uncle, talking about "going giggin'" on some nights. When I told my mother & grandmother I was NOT going to eat any frog legs, my grndmother replied: "Good. Saves more for us."

When I was quite young my family and I went to visit friends in the country in California. I remember the men collecting their gigging equipment and taking off in their boat to go frog gigging at night. They brought home a load of frogs which the women cooked but I don't remember if I ate any or not. I remember them saying it tastes like chicken. Deb