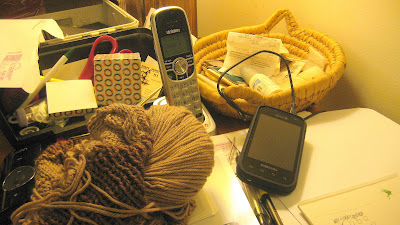 *
See the two phones up there? Obviously the one to the left is my landline and the other is my new cell phone. Previously, I had thought I was all "modern" because my landline phone had a little pedestal which enables the phone to be elevated up into the air--- and so you can see it and get your bearings if you are ever lost in a cornfield.
But I'd been wanting a new cell phone for awhile and so Blaine helped me buy one. I picked one out of the hundreds of Sprint Phones he "approved" of on the internet, gave him the money, and told him to pick it up on his way home. And thus, he came home with something he called a "Smart Phone". But it looked normal enough for me so I wasn't too worried.
That was my first mistake.
Then I emailed my sister and told her I'd gotten a new phone. She asked: "Is it a Smart Phone? Mine is and I couldn't live without it."
Smart Phone? Why, I asked her? Are there Dumb Phones? Are there Genius Phones? Are there phones for people who surpass even the term "genius"? And she replied that I would "love" the phone because you can play Scrabble on it and also use your email account. I told her I hadn't a clue how to operate the damn thing.
(I secretly thought I must need the "Dumb Phone".)
Then I made my second mistake. I asked Blaine why they are called "Smart Phones"......
And he began the longest soliloquy I've ever heard extolling the virtues of the various things you could do with "data", Kindle, spreadsheets, serials and conference calls on the phone.
Finally, as my eyes were beginning to glaze over, I simply asked:
"Okay, how do you answer it if it rings?"
*
*
Posted by Bo... at 11:07 AM

That is hilarious! I am the same way. My daughter handed me her Smartphone to call someone and I just stared at it. I am a real techno-dork though. I still don't know how to work our bigscreen tv. I just want to call and text and forget all that fancy whohaa. I laughed out loud about being lost in a cornfield though. At my house on my countertops that would be handy!
Sue

I am right with you there. I have the most basic cell phone with the most basic plan. Last week my ex-husband asked me if I wanted a free Blackberry. I was intrigued until he started telling me about the "data plan" I would need and (god help me) I asked him what that was. I must admit, I didn't absorb most of what he said, but the phrase "about $100.00 a month" sunk in, and as much as it sounded like fun, I just can't justify spending 60% more than I normally spend.

Hi Lora! I agree: I wasn't too thrilled when Blaine told me we were going to have to pay more per month. Because I figure I won't use about 80% of the features of the phone, but we'll be paying for that 80%.

What a fucking moron you are. Thank GOD you did not have any children to pass your stupidity on to.

you are just boring now...

did you read YH last post?
isn't she just the most amazingly wonderful person?

"SMART" phone
guess that leaves you out

boy, those baby sweater the YH is cranking out are gorgeous and that blanket! to die for

from sheep to shawl, that YH's talent knows no bounds!
what is that "brown thing"?
some dime store bulk acrylic no doubt

Bo - is all okay with you? You haven't posted in a couple of weeks, and that's odd. Just sayin'.

Hi Linda! I'm going to explain everything in an upcoming blog post. Thank you for your concern. I'm okay--but things going on in my life are interfering with my blogging.

Anonymous: Actually, our faith doesn't do kneeling. We stay sitting in the pews. And we're not go to church today. Blaine is roasting a lamb on a spit for our big family dinner with all 3 households of Blaine's relatives. So I did my prayers in private. So why don't you shut up and do some prayers for forgiveness of your own.

your prayers in private
what a laugh
Jesus loves you...
enjoy your sacraficial lamb