Christmas At The Various Houses of Bo's Family... 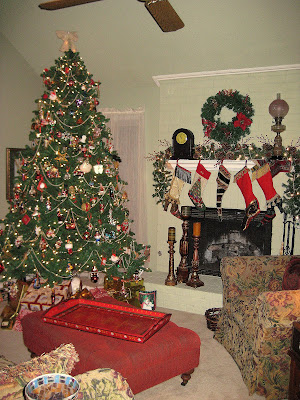 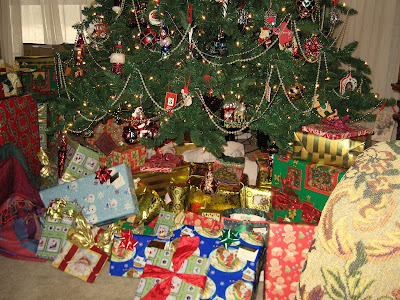 My family is known for their big Christmas celebrations and this year was no exception. We spent it at my sister's in Dallas and there were so many presents that they spilled out from the under-the-Christmas-tree-area and had to be strategically placed all over the living room. 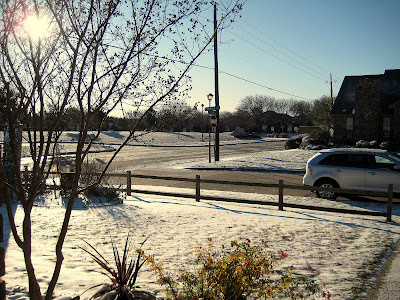 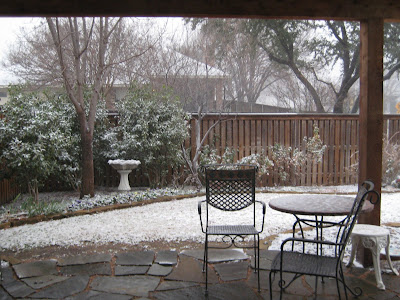 On that wonderful Christmas morning we all opened up the umpteen presents--- and even my niece's cat seemed to take delight in all the discarded wrappings and bows! 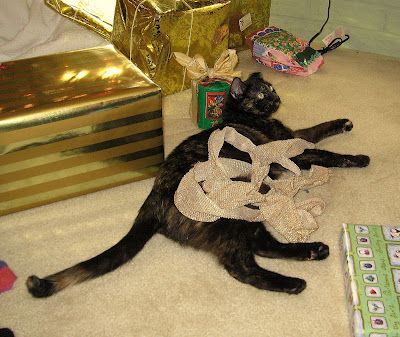 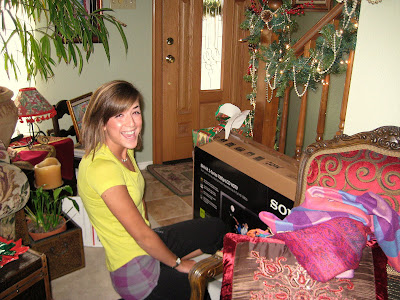 Later on my niece was a good girl and set the table for our Christmas dinner. My sister had decided that she was going to cook an "English Christmas Dinner" , the main course consisting of a prime rib roast and Yorkshire Puddings---the prime rib part which would prove to have several pitfalls. You see, several days before Christmas my naive sister had hurriedly instructed her butcher that she wanted to order an "Eight pound Prime Rib". Upon noticing the incredulous expression on the butcher's face, my sister had indignantly stated: "I know that's a big one, but I want there to be enough for leftovers". So the hapless butcher simply shrugged and took her order. On Christmas Eve my sister cheerily went to pick up the prime rib.... and promptly had a near-cardiac arrest when told the price of the behemoth size of meat. It cost $150.00. Yes, one hundred and fifty damn dollars...... But, not the type of person to be daunted by the mere price of good beef, she simply paid for the roast and brought the dang thing home. Sometime later her more down-to-earth boyfriend came crashing into the kitchen, frantically looking for the roast, declaring loudly: "This I gotta see! A damn piece of meat which costs $150!" "Yep," I replied from my perch on a nearby counter, having already experienced my own conniption fit when I'd viewed the roast's price, "And by my math, I figure each bite costs about $11.50..." 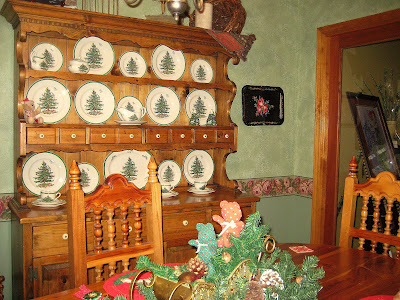 Anyhoo, never one to flip out over unexpected issues like the price of eight pound roasts, my sister continued on with her English-style dinner and squealed with delight over the Yorkshire Puddings when they emerged from the oven. She had fretted and labored all day long over the little puddings, wondering aloud worriedly if the fact that we had not been able to find a proper popover pan anywhere in Dallas would affect their quality. So she had finally settled for cooking the puddings in a deep muffin tin. It didn't matter to me---for I have never seen nor tasted Yorkshire Puddings in my entire life and thought the ones my sister had cooked were wonderfully delicious no matter which type of pan they had been cooked in.
(And, as we all crowded around to watch them cook through the oven window, they certainly did seem to rise into a proper "pop"--- and then "fall" around a middle indentation properly---just like in the pictures of them in the English cookbook. In fact, I'll wager that nary a batch of English Yorkshire Puddings has ever been watched so closely as this one....)
(But what pan do they use in Great Britain? Do they have actual Yorkshire Pudding pans rather than popover or muffin tins? And I wonder where you could buy them in Dallas?) 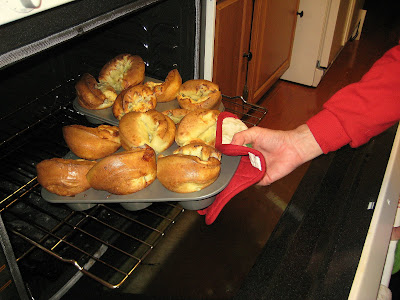 Then, after eating the huge banquet, we had to honor a Christmas tradition and go drive through the neighborhoods which compete for prizes by how fabulously they decorate their homes for the holiday. Some of the houses were quite dazzling. Below is the house which won the prize for the "Most Traditional", as you can see from the award banner on their front lawn. (Most traditional? I would have thought it would have won the "Most Similar to National Lampoon's Christmas Vacation House", but that's just my opinion....) 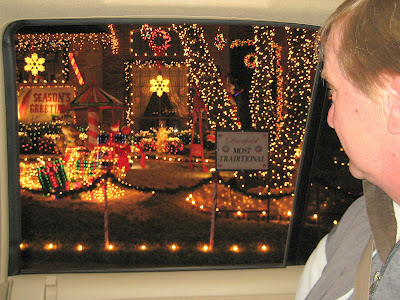 Finally, it was time to make the trek to my uncle's house in the swamps of Louisiana, where we were going to celebrate another Christmas. On the way to Louisiana I made the acquaintance of a very nice horse. 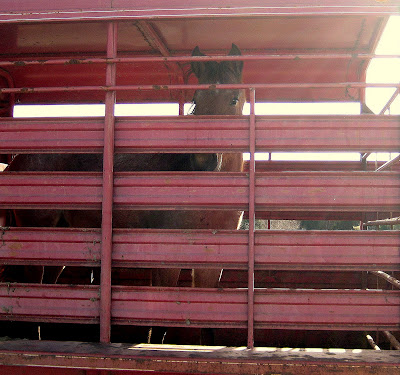 Soon we approached the Ouachita River, the water level of which (in my uncle's area) has gone way down since its previous flood level, where it had been when my mother and I had gone there by boat to celebrate Thanksgiving. My uncle's place is now approachable by 4-wheel drive vehicles over dank, puddled and mud-ditched dirt roads, many of which have been fortified by straw and sand bags. But this situation is going to change soon, as the local officials have predicted that the river will again rise to flood stage soon, due to the recent heavy rains in Texas and Arkansas. 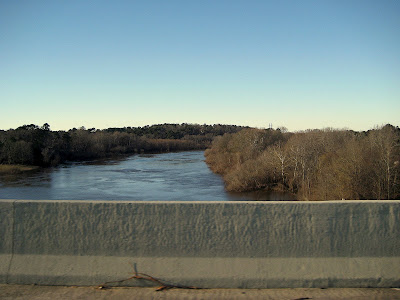 Poor Blaine's eyes were all agog as we drove through the endless swamps by the groves of cypress trees under water. And then, after arriving at my uncle's place, he turned a little pale when my uncle mentioned that he had recently spied another alligator in his yard, a 3-4 foot one--- and also that one of his friends had seen a ten footer in his own yard last Tuesday. I warned Blaine that he should stay in the house most of the time. And I also told him that if by chance he ever noticed something on the ground which looked like a "stick", that he should avoid it like the plague since it was most likely a snake.
(After my uncle's and my warnings, Blaine had whispered to me furiously: "Maybe we shouldn't have said we'd stay till Wednesday--- maybe we should leave on Tuesday instead?") 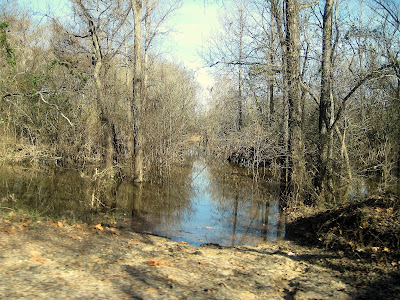 The below is the recipient of my hellacious aran sweater effort---and he loved it to death! He wore it to work the next morning and said everybody loved it on him. That made me feel pretty good. 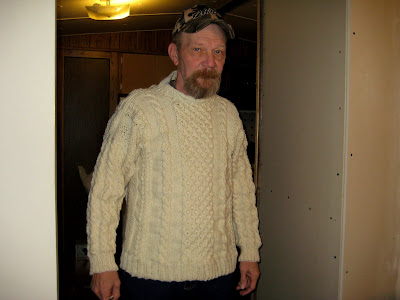 And then all too soon it was time for Blaine and me to go home to Kansas. And so, reluctantly, Blaine and I took to the road again. And let me tell you, the whole way home the weather was awful, getting more snowy and cold with each passing mile. Even the cliff faces were frozen. 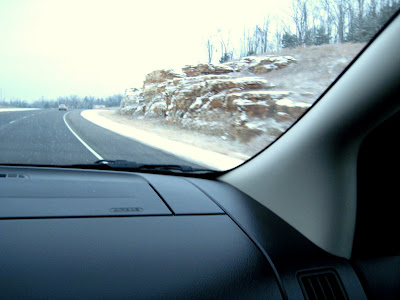 Along the way, we decided that we were too dog-tired to do the whole ride in one day, and so we pulled our snow-covered car into a snow-covered Holiday Inn. All I wanted to do was to get into a warm bed, but I did notice the giant, life-sized Santa Clause in the inn's lobby. 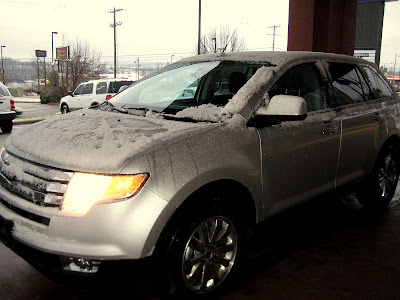 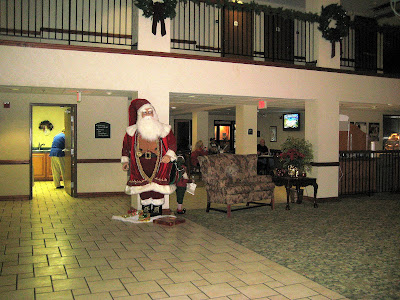 The next day was still bitterly cold, and the weather alternated between drizzly greyness and snow flurries for miles on end--- but onwards we trudged, plotting our course with the help of Blaine's new toy, a Garmin GPS doo-dad which irks me no end. In fact, I hate that thing. It actually talks to you.
For example, whenever we took a wrong turn, it went to great lengths to verbally tell us how to get back on the right track. It says things like: "Recalculating..... now please turn around at next intersection." There was one time when Blaine had accidentally turned onto a dead end road and the damn Garmin thing told us so---and I am not proud to admit that I promptly exclaimed: "No shit, Sherlock!" 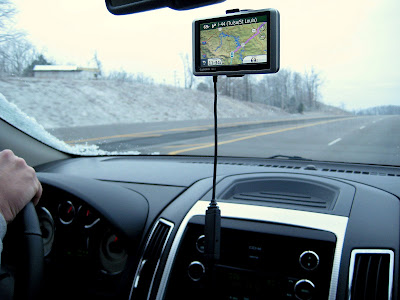 Anyhoo, onwards we drove through Indian Territory in Arkansas and Oklahoma. I love all things Indian and wanted to stop at a souvenir shop but I knew better than to ask. My mother had given me two cunningly beautiful, soft leather pairs of beaded Minnetonka Thunderbird moccasins for Christmas and I knew Blaine would have given me a stop-dead, "you've got to be kidding me", withering look if I'd so much as MENTIONED wanting to look at anything else Indian.... 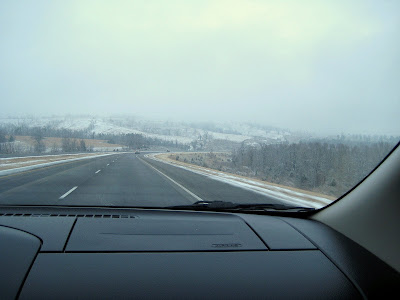 I knew we were getting close to Kansas when I saw the cows, who ignored my friendly wavings. 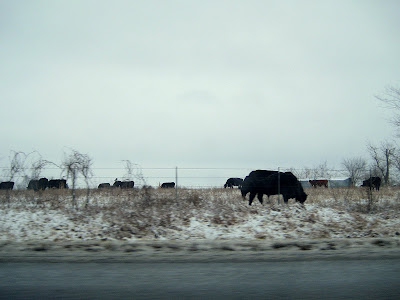 And then....finally....we were home... whereupon Blaine suddenly launched into his yearly cuss-fest about how the snow plows never quite seem to take our street seriously. 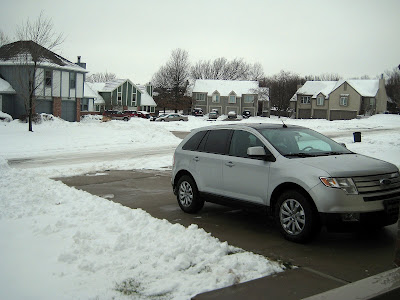 P.S.: My mother has finished the front of the grave marker for Shelby. After Christmas she will begin work on the back. I think it's beautiful. 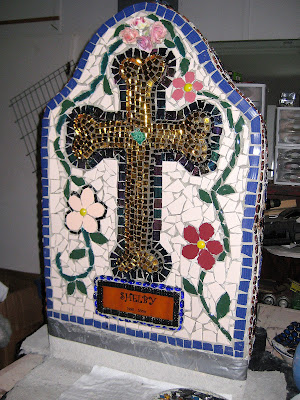 Thanks for "taking us along".

I'd been on pins and needles to hear how the sweater was received. (Old Cajuns are known to speak their mind, you see.) So glad he loved it!

Happy New Year to you and yours!

That sweater couldn't be more perfect! You could make a career out of designing (wait, I can hear your head exploding from here!). I'm glad you had a great Christmas. The grave marker is incredible.

That sweater fit him perfectly and was drop dead gorgeous! I take it Blaine didnt get to see a gator, huh? Sounds like dinner was fabulous - and I love how your sister has her Christmas dishes displayed in the hutch. But - wait - what else did you get for Christmas? Besides the mocassins (something I always yearned for - especially when we went to Maine - and never got!)?

Looks like you had a great Christmas. Glad the sweater worked out so good - looks great. I'm originally from Scotland, and we always make our yorkshire puddings in a regular muffin pan. The ones you guys made look perfect. Mmmm haven't had them for a while - looks like I'll need to get busy.

My wife is Yorkshire born and bred. She tells me her mother always used the same pan to make Yorkshire puddings. And when you pour the batter in, the fat or oil has to be smoking.
Aunt Bessie's are not the real thing, they're only mini puds. The true Yorkshire pudding is about a foot in diameter, and everyone gets a piece, served with onion gravy.

I enjoyed your Christmases and wanted to say how lovely the aran sweater turned out and couldn't have fit more perfectly. Your uncle looks properly handsome in it!

Thank you very much, you guys!

Your blog keeps getting better and better! Your older articles are not as good as newer ones you have a lot more creativity and originality now keep it up!

THE KNITORIOUS MRS. B said...

Beautiful Aran sweater. I reaally want to knit one for myself. The fit looks perfect!
Happy New Year!