The whole thing started out as me wanting to knit some of those slipper socks with the suede soles that you attach to the bottom of the socks. And I wanted to knit with colors and patternings that remind me of Native American dancers, especially the Kachina. One of my great-grandmothers was a full blood Cherokee and so I really appreciate those things of the Indian cultures. My Mamo, who just passed away recently, had many authentic Indian articles in her household. So I got the leather soles and knitted up a mock-up Kachina sock with an extremely high leg/cuff (to symbolize the tall nature of the Indian dancers' moccasins). I knitted it in colors and designs I've seen and admired in Native American clothing. All was going well until I finished the first sock, attached it to the leather sole---and tried it on Blaine. And I realized I had made a big mistake in the mock-up. (Which is why I guess it's a smart thing to make a mock-up...) The gauge was totally too loose and when it was on Blaine his foot kept slip-sliding all over the leather sole and its edges. Not acceptable. It wasn't acceptable because I plan on knitting a pair for both Blaine's BIL (since I knit his sister a pair of socks a couple years ago and now it's his turn) and also for my sister's new husband, whose foot is so big that no bought house slippers fit him. And I want them to be nice, fitting well. So I dis-attached the Kachina sock from the leather sole----and guess what happens? Blaine wanted to try the sock on again without the leather sole. And hell must have frozen over because Macho Man Blaine, who heretofore has always refused to wear anything other than plain solid grey, black or brown, actually WANTED this colorful Kachina Sock! Go figure! And whodathunkit? (You can click on the pic to enlarge it and then you'll be able to see the light grey as well as the dark grey---the light grey shows up better in person.) 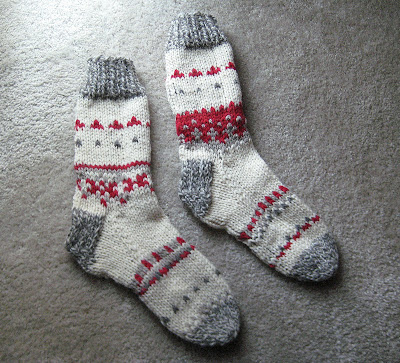 So what could I do but make the other one? I just now finished it and so he'll have the whole pair tonight---he wants them as house slipper socks because the yarn is soft and warm, and the sock goes high up on his leg. (And I know they don't look the same---but you know how I never knit two socks or sleeves the same--thus the fraternal twin nature of them.....) And also I know that they're not exact copies of Indian moccasin dancing boots but I used those colors and patterns which inspired me and added my own twist on them. Call them Bo's Version of Kachina Socks.... 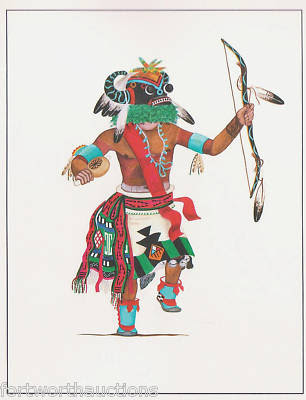 Meanwhile, I now have to start the other two guys' Kachina Socks. I'm going to go down a bunch of sizes of needles to get a more stiff gauge. Hope that works. I'm thinking of adding fringe around the top or down the back seam to make them look more authentic as the Native American dancing moccasins I got my inspiration from.
See the pony below? I covet it. It's the one called "Kachina" from the collection of pony statues from The Trail of Painted Ponies that I collect. I wish I had this one. I love those ponies. And I like to think of my ancestors riding as fast as the wind on beautiful ponies such as this one..... 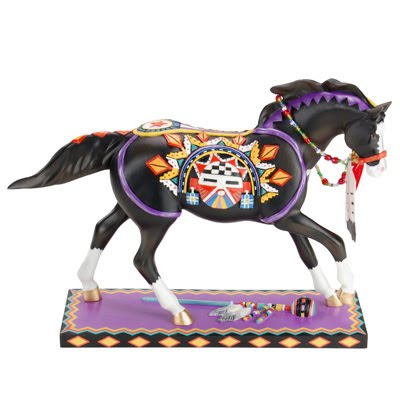 Very nice socks. You have talent. Enjoy it.

LOVE those Kachina socks, Bo! They just have something about them that's just right. (course I like your other socks too---it nearly drives me to dig out my knitting needles and try again, although I was a horrible failure at it last time!) So cool that Blaine likes them!

Thank you so much, Knitman and kg! You made my day!

What beautiful socks & what a beautiful tribute to your Native American heritage.

Gorgeous!! You are an inspiration !

Why is it you expect absolute perfection from EVERYONE but yourself?

Anonymous---I take it you don't like my Kachina Socks.

I love your knitting nook! So cozy!

Any chance of a pattern for these? I like the way I could pick out a pattern or twelve and make the socks match or not. I like making socks that are a little more entertaining than just plain old vanilla socks but I don't want to get a PhD is socks either. I just want the to look like I made them, instead of skipping down to WalMart. In fact, my favorite sweater was from walmart. Great gray hoodie that was perfect...except it was acrlic and sort of WalMarty looking. So I bought netter yarn and copied the sweater. The old one is in the car boot in case of a sweater emergency, The new one is just an absolute gift from the Two Sticks and a String gods.