Will You Join Me in The Greatest Power of All? 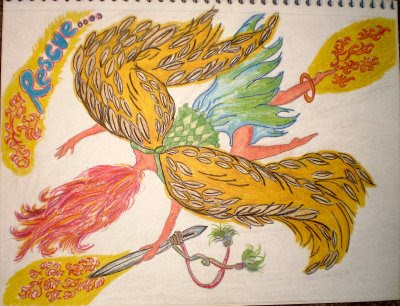 *
For united we stand,
divided we fall,
And if our backs should ever be against the wall,
We'll be together,
together, you and I....
("United We Stand", The Brotherhood of Man)
*
*
As I continue to watch the post-earthquake TV news out of Haiti, I continue to weep tears of sadness and despair for those poor people.
Last night and this morning I saw news clips which suggested that the present chaos is rapidly deteriorating to a situation whereby the desperation of hungry, thirsty people has caused many of them to organize into violent gangs, armed with machetes, who have taken to the streets to FORCIBLY fight for what scant supplies of food, water, and other goods there are, leaving the weaker people with nothing.
Also, I almost can't bear seeing the degree of injuries in the survivors. Many of you know that I worked for 22 years as an RN, many of those years in ER's and trauma centers. And, thus, I know full well what it means when somebody has a traumatic injury. It means that if they don't get rapid medical treatment for such injuries, they can lose limbs, develop gangrene, lose the ability to walk or use arms, develop infections, fall victim to looters, or even die. 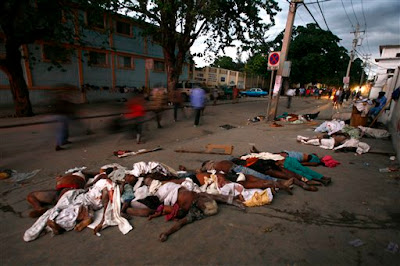 And so, I'm reiterating a couple of things from my previous post about ways to help financially, but I'm also going to list some other ways you can help---and one in particular that is more powerful than them all.
First, you can easily donate via your cell phone by texting "HAITI" to 90999. Then, a $10 donation will be given to the Red Cross, which will be deducted from your cell phone bill. You can do it as many times as you like.
Also, the official website of the American Red Cross can show you other ways to donate. 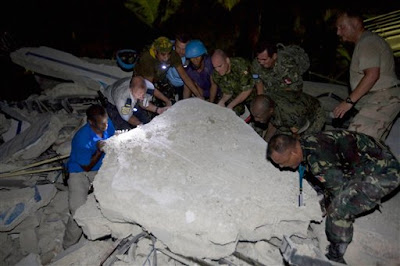 Also, there are groups forming which are doing such things as crocheting/knitting blankets for the Haitian victims. I've joined one on Ravelry called "Hugs for Haiti". All you have to do is knit or crochet a 12" square and send it to the list-mom. But not everybody is on Ravelry. But there are plenty of other ways that you can help.
For example, every day I see on the local TV news channels that there are many local charities organizing drives to collect all kinds of items to send to the victims in Haiti; i.e. toiletries, soap, shampoo, hand towels, toothbrushes and toothpaste, clothing, and other things which are very much needed. 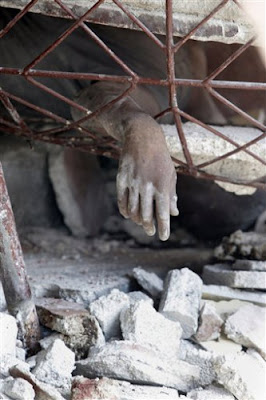 For example, today, here in Kansas (and we're near the Missouri border), one of our local TV channels is having a drive today to collect just those items I mentioned above. The Heart to Heart charity has got their truck parked at the KCTV5 news channel station to collect the above-mentioned items. Their information link and address is here. They'll be there all day and into the night.
So if you check your local news channels' websites, I'm sure you can find all kinds of ways to help, whether financial, donated items, or sheer manpower of helping in this effort.
And now....I'd like to talk about the Greatest Power of Them All....
And I do mean that it's the greatest power of them all... literally.
It is the power of prayer.
Don't ever underestimate the power of prayer! It's almost scary how much I've seen prayer work! I've seen prayer engender umpteen miracles. If you don't believe me, check the Bible. There are countless stories in there where it says "the people cried out to the Lord"---and then the next sentence/chapter says: "And the Lord heard the cry of the people."
And another time, Jesus said "Ask and it shall be given you, seek and you shall find, knock and it shall be opened to you. For everyone who asks, receives; and he who seeks, finds; and to him who knocks, it shall be opened." Luke 11: 9-10.
And so, I'm calling out to you to join me in "The Million Knitters/Crocheters Prayer Circle" --- and then pray daily for the relief of the suffering of the Haitian earthquake victims! And even if you're not a knitter or crocheter, just pray along with us as a "praying buddy" !!!
All we have to do is to pray to the Lord daily that the people bringing comfort and relief to Haiti get there as soon as possible and are able to relieve the suffering of the Haitians. And we can pray that any people still alive and stuck under debris/rubble can hang on until the rescuers dig them out. And we can pray that the relief from the contributing countries will reach Haiti before those gangs with machetes begin massive rioting. And we can pray that the various military agencies deployed to Haiti can bring civil order and get things under control so that the medical camps, refugee camps, and the deliverers of donations/medical supplies be given out in an organized, effective, and non-violent manner.
Because I believe, with all my heart, that there is power in numbers when praying to the Good Lord up there. Hey, He has listened to me before---and answered my prayers! So I know for SURE that he'll hear all of us when we pray together! And believe me when I say... God can do ANYTHING. 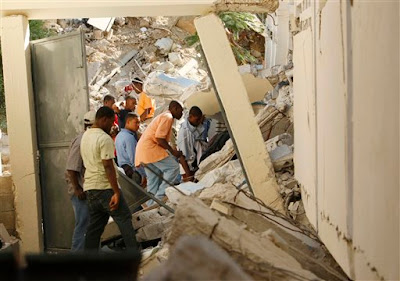 So won't you join me? Heck, we can raise up such a prayer-ruckus that it is heard all the way up to the highest choirs of God's angels---even all the way up to the Glory of God!
He will hear us, that I can promise you.
And He will answer!
So please.... won't you pray along with me? I guarantee you that we'll get positive results!
*
*
Posted by Bo... at 8:00 AM

If your god can do anything, why did he do this?

The question of why God allows such things to happen is one which we humans have never been able to find the answer to.

I know it says in the Bible that God "tests" us.

Also in the Bible it says that there will be terrible natural disasters during "The Last Days", for which many believe is beginning to occur. But nobody knows that for sure.

Personally, I have been mad at God for a lot of things, and when I get to Heaven, I am definitely going to have some SERIOUS questions about some things.

Like, why did me make me an alcoholic? I have raged at God for that for my entire life. I have to live every day battling that urge. (I'm currently in recovery although the disease has racked my life with misery and disaster.)

Nobody knows the answer to your question---but I do know that it says in the Bible that we have to operate on "faith", which is a belief in something that we cannot see or prove.

Jesus did live and die---and he died to save us all from our sins. Why don't you ask Him into your life and see what happens? You might have some more comfort about the human task of enduring pain and suffering.

And also, if there were no disasters, how could humans learn compassion and mercy? It is in the worst of times that we prove just how much we attempt to follow God's instruction to take care of those in need.

There's a purpose to everything God does---but we just don't know what it is. (Maddening, but it's the truth.)

Joining you in praying.
Thanks Bo!

Bo - thank you so much for the link to the Hugs for Haiti.

I don't have any answers why this happened but I'm going on faith that there will be grace, mercy and goodness inside all of this mess. Thanks for carrying the message.
Sue