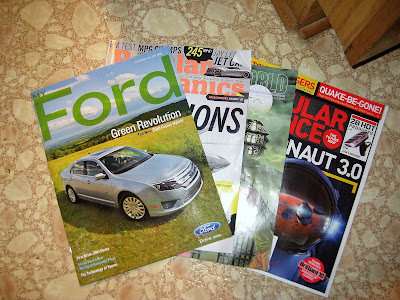 *
Oh, Holy Hannah!
Much to my regret, I just walked into the downstairs bathroom...
Sigh... Am I the only one with a man who thinks of the bathroom as an extension of the living room? After Blaine left for work, I entered the downstairs bathroom and found the following items strewn helter skelter about on the floor and the sink counter: 1. An ashtray and lighter; 2. A half-empty coffee mug; 3. Four magazines, "Popular Science", "Popular Mechanics", "My Ford" , and some strange computer magazine called "Networkworld" ; 4) A calculator, and 5) A flashlite. It's driving me NUTS trying to figure out what he needed the calculator for. Why would anybody need a calculator while they're sitting on the pot? Knowing him, he was probably trying to cipher the exact number of squares of toilet paper I've used compared to him, since he's always harping about how I "waste" toilet paper. (And I don't EVEN want to entertain any thoughts about what in the Sam Hill he needed the dadgum flashlight for....) When I go to the bathroom, I go in there to do what bathrooms were invented for---and that's it. I don't sit around in there contemplating the universe, reading, doing mathematics, or other pursuits. But Blaine is in there for what seems like eons. And I'm wondering what in the heck he'll put in there next---a flat-screen plasma TV mounted on the wall? Hell, he spends so much time in there as it is, that if there was a TV on the wall I am quite certain he'd NEVER come out... * *
Posted by Bo... at 5:55 AM

Maybe he is trying to avoid YOU

here is what i think you should do:
-hide out in the bathroom and wait for him.
-smoke a cigarette (i hear this can look intimidating).
-drink some coffee (cops drink a lot of this)
-when he enters shine the flashlight in his eyes and begin your interrogation.
-if he answers back or gets out of line then bonk him on the head with one of his magazines (rolled up of course)
-then tell him you shall be taking the calculator and documenting the time he takes in the loo from now on.
-remember you are a bad-ass knitter and are IN CONTROL
(you may also want to counter his argument about the bog roll with the fact that he is the 1 in there all the time so he's likely to be the one using it!

Knitrageous: That is too funny! (I like the part about bonking him with a rolled up magazine!!)

To Anonymous: Shut up. You're showing your total idiocy. And by the way, your comment is so childish as to be laughable. Are you in Kindergarten?????

See how childish you are, Anonymous? You're so hoping that I'll get upset. But I'm not. I jsut can't believe how many members of YH's "We Hate Bo" club are like 4-year old toddlers. Why don't you go haunt her blog instead of mine? You're not welcome here.

"A mirror reflects a man's face,
but what he is really like is shown by the kinds of friends he chooses."

Nope. Not gonna do it. Gonna stay right here and read your crazy ass blog.

Sigh....well if you're going to stay, then you need to be nice.

y are you not being nice in the first place?

Knitrageous--it has to do with something I did last July. I expressed an opinion that was totally not popular with the friends of YH. Since then I have received a TON of hate-mail.

Also Knitrageous---the opinion I expressed was twisted by those angry people into a whole completely WRONG issue where I was vilified for all kinds of separate things---but they're going to believe what they want to believe. I am who I am. And thus, I still stand by my original stance, which was this:

I interpreted the things YH said on her "Canada Day" post as being mocking and unflattering to America. (And I feel that she has done it other times as well.) I stated that I do not like it that she says those kind of things since she makes 80% of her money off book sales and classes in America. (And I received tons of emails from people who agree with me.)

I almost lost my life in the Middle East in an anti-American incident whereby the American Embassy (where my mother and I were) was stormed by militants and terrorists in 1998. You just can't imagine how frightening that would be. (The Syrian government sent troops to save us at the ninth hour, after the Embassy marines lobbed 121 cannisters of tear gas at the mobs---and our marines were reduced to handing out extra weapons since our situation had gotten so dicey that we thought we were going to have to shoot it out in the end, trying to protect the Ambassador as he and his staff shredded documents which would compromise American security---a la what happened in Iran in 1979.) (I still have nightmares about that day...)

I grew up outside my own country and I can be very touchy about anti-Americanism. I don't mind if somebody doesn't like us---but I don't appreciate it if they criticize us while making money here.


That's it in a nutshell.

You big silly! YH has nothing to do with this!!! It's all about YOU.

Whatever you say, Anonymous. (Where were you before July?)

wow well ok, i read the blog from july. im british, and im gona pull a swiss one here. im neutral. im a journalism student, i do get riled up about stuff so i no how you feel about getting shat on etc. i can see the anti-americanism in her canada day blog. but dude, i dont think she meant it in a horrible way, i think she was just bigging up her country cos shes proud, im proud of my country, i dont particularly like iraq rite now and if i sed some of that stuff on my blog i wood be expect for someone to have a go, i think she is just bloggin what shes feelin and we all have the right to that. sometimes stuff happens that we dont like and we gota take it on the chin. i guess you said your piece in july and if other people gona carry on goin on about it then its gona keep coming up.
this is a lifestyle and knitting blog, we all have the right to our own blog, so you can say what you want on yours.
i can see why your patriotic and again, you have every right to be and you hav obviously been through a lot.
can we have said our piece now?
i'm sure you don't hate yarn harlot as a person bo? you just disagreed with what she said and it all got a bit out of hand?
maybe if we have an argument against bo we could tell her why we dislike her and she cood tell us her side? rather than snidey comments? we are all adults, what ya say?

Thank you, Knitrageous---you make a lot of sense and I think you're right about things. Thank you for taking the time to see both sides of the issue with understanding. And what you said is true---it did get out of hand. But now it's in the past, and there's lots more fun stuff to do than argue--like KNIT!!

Hee. Ever since the husband got his own bathroom, I don't even go in there. It's scary.

I think it's a man thing - even at work, guys will make no bones about taking in the newspaper (FROM THE RECEPTION AREA!!!) into the men's room. Uh, ewwwwwwww!

Men can spend ages in the loo, but complain about the amount of time we spend there...and I don't have to share mine as live alone...but did raise 3 sons..
I knit in mine, and I also read...would knit in the tub while I soak and relax if i could figure out a way to do that and not get the blasted knitting soaked...anonymous is not even entertaining...we all know men spend their lives trying to avoid women yet needing us..lol, 40,000 years of human and men still let that sex drive control them...to our advantage--most of the time

Dear Bo, If you think Blaine leaves a mess you should see the bathrooms in my house of males. Holy Cow. Blaine is a clean freak in comparison. I think you should be grateful he is as good as he is.
Seriously you should see my house. Obviously I have not yelled enough in bringing up my sons and Husbutt is worse than all of them.
Also your anonymous haunter is just nasty.

My father has always been a "camper". We would often needle him about disappearing into the bathroom for what seemed to be an impossible amount of time. Now... my eight year old son has started. Seriously??

What is it with those y chromosomes?
I know I feed him a healthy balanced diet with plenty of fibre. (yes.. that's one of those weird canadian spellings... like theatre or centre... influenced by our french heritage I guess.)